Alleria the Windrunner Guide & Build, a hera that introduced on Dota 6.55. She was an extreme hero when she first appear on beta version. Her old ultimate make her as a totally flying unit that can walk over trees and hills, awesome! But her skills got changed on later beta and the official one. Both with Kunkka the Admiral, they are great additional heroes. And yeah, she is an Intelligence hero, lot of people mistake and assume her as Agility type. I think that’s because we’re seen her as Traxec ^-^ 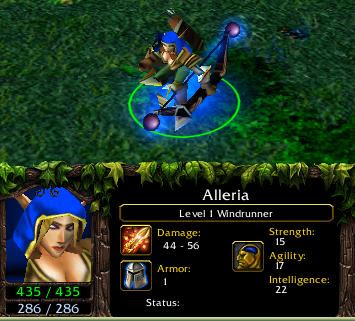 These are her skills.

Shackleshot
Alleria fires an enchanted arrow using wind magic that binds the target to an enemy unit or tree behind it.
Cooldown: 14
Manacost: 90/100/110/120
Always knocks back the target. If the target hits a group of units or a tree, the struck units (including the target) are stunned for 1.4/2.1/2.8/3.5 seconds. (700 unit cast distance)

Power Shot
Windrunner winds up her bow for up to 1 second to perform a single powerful shot. The arrow travels 1700 distance, dealing damage and destroying trees in its path. The damaged dealt is greatest to the first target of it hits and is reduced by 10% with each other it passes through.
Cooldown: 12
Manacost: 90/100/110/120
Deals 120/200/280/360 damage to all enemies in straight line. The arrow has vision and knocks down trees in the process.

Windrunner
Imbues her body with the essence of wind, increasing her movement speed by 50% and giving her the ability to evade all physical attacks for short period of time. Additionally, the gusts of wind around her impairs the movement of nearby enemies, slowing their movement speed in a 300 AoE around her.
Cooldown: 65/50/35/20
Manacost: 100
Say goodbye to this Imba cyclone skill, now it only gives you 50% ms increase, and 100% evasion for 2.75/3.5/4.25/5 seconds and 8/16/24/30 % slow.

Focus Fire (ultimate)
Alleria channels wind throughout her body to surge an excess of adrenaline, giving her maximum attack speed on one target for 10 attacks. Damage is reduced in this state.
Cooldown: 60
Manacost: 200/300/400
Now, her ultimate has been nerfed. No longer IMBA flying unit. Now it seems to give max attack speed for 10 attacks as long as your attacking the target. Your damage get reduced on 50/40/30 % while using this skill.

She is very good at chasing and ganking. Shackle Shot and Power Shot make for great chasing abilities. Power Shot can be used to create shortcuts through trees to catch up with your target.A properly aimed Shackle Shot (to ensure the enemy hits other units or trees and gets stunned) is necessary to make full use of this skill. Windrunner makes you easily catch up with fleeing enemies. Her ultimate aim you to be a damage dealer. All in all, a fun hero. A bit lacking in damage, but makes up for it with interesting abilities. Thanks to redrach and Mr.Jag for this complete analysis of Alleria. 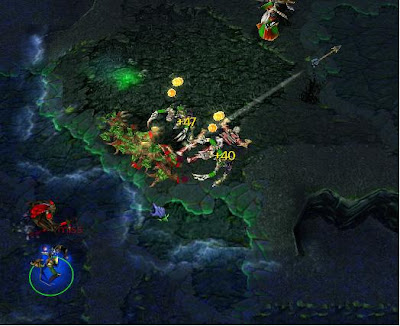 Power Shot! It’s damages whatever it’s through. It’s also cut the trees. After the update, there’s short delay before the arrow released. 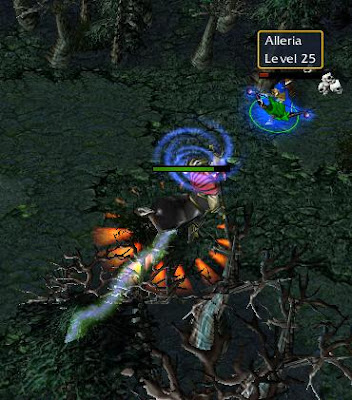 Shackle Shot, it will ‘link’ two units together and stun them both, hence, shackles. It wont stun nearly as long if there is no unit near by.. 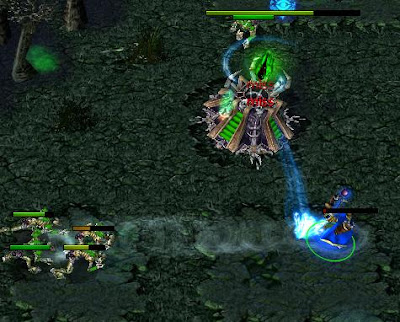 With 100% evasion and 50% movement speed boost, Windrunner is the ultimate fleeing and chasing skill!

Windrunner will be taken at level 1 so you can avoid potential first blood ganks on you. From here, Powershot will be levelled over Shackleshot; Shackleshot is too unreliable at the beginning to be truly effective. Powershot’s damage is tremendous so it’s much better to rely on and it also allows you to harass your enemies much better. Finally it helps finishing off escaping enemies in ganks and whatsoever should you get in a such situation. However, Shackleshot will be maxed directly after because you will hit it in many situations once you learn to use it effectively and its duration is terrific once it activates correctly.

Add 1 level of Focus Fire after you’ve maxed Powershot and Shackleshot. 1 level is good because you can use it to shoot towers and other huge resting things (hi Roshan!), but leveling it from here is overdoing it. The 10% extra damage is not a negative thing, but a lower cooldown and longer duration on Windrunner is more important right here. Max that ability fast and get the rest of your skill points in Focus Fire when you’re available.

Justifications
Two Mantles of Intelligence, a Circlet of Nobility and a set of Ancient Tangoes of Essifation will be bought as your starting items because they give you good damage for last hitting purposes + some health and mana to harass/withstand harass. The Ancient Tangoes of Essifation will of course be used to neglect harassers too, so you can stay in your lane longer.

Later you will upgrade your two Mantles to Null Talismans so you have more health and mana for ganking + some extra damage to last hit and “general attacking” as well. Boots of Speed are mandatory as always.
Guinsoo’s Scythe of Vyse will then be bought so you can (almost) perfectly set up ganks yourself without having to rely too much on other disablers. Once you have your Guinsoo’s Scythe of Vyse, positioning Shackleshot will be ten times easier hence this is why this item is your corner stone.

Once you have your sheepstick, you should buy Orchid Malevolence because it gives you excellent damage and attack speed, which is just what you need to fight with and without Focus Fire. Buying pure damage is not a completely good choice because you will shoot too slow when you don’t use Focus Fire which of course you won’t be able to all the time, hence you need attack speed too. Finally the buffer effect it gives neglects Focus Fire’s reduced damage very well. This is also why you should buy a pair of Power Treads later when you feel like you can squeeze them in your build. Boots of Travel are good but not completely necessary; Windrunner will give you 518 movement speed when you have Boots of Speed alone, so you don’t need the extra movement speed from Boots of Travel + you can get around more easily when you blaze fast. The attack speed on the Power Treads is really what we’re looking for so you can deal greater damage “outside” Focus Fire.

Finally Stygian Desolator gives you excellent damage for your ultimate as it penalties a part of your target’s armor, giving you more direct, raw damage.

For lane assignments I usually prefer to either solo somewhere, or lane with a stunner, but it doesn’t matter terribly much though.
Once you’re in it, you should try to harass your enemies with Powershot from time to time when you’re level 3 and above. If you’re laning with a stunner, you can try to go for kills at level ~3-4 and above where he stuns first so you can position yourself for a Shackleshot.

See if you can stay in your lane for awhile and farm some gold for your items, but once you’re level ~6-7 and above, you should begin to look for opportunities to gank. Try not to spend too much time roaming so you lose too much gold and experience without really succeeding in anything. Try to look for “obvious” gank opportunities with allies and something that you can finish successfully and quickly.

When you’re not ganking you should try to farm a little gold for your Guinsoo’s Scythe of Vyse. Don’t spend all your time running forth and back because it will make you horribly outfarmed later.

Still try to look for opportunities to gank. Ganking on your own is often not very smart because you won’t have the capability to take your enemy down. Ganking with one or more allies (preferably someone with a stun) is way better, hence you should try to follow your allies around in ganks to make them successful.
Try not to get yourself in the spotlight; you’re vulnerable to nukes and disables so getting in the front and in the center of the combats every time is mostly a bad idea. Try to let your teammates walk first and let them initiate. Then wait for a correct moment to catch someone with Shackleshot and/or finish them off with Powershot.

When you aren’t ganking with your teammates and if you aren’t pushing either, you ought to farm (lanes preferably) for your Guinsoo’s Scythe of Vyse. In a decent game with decent farm and decent opponents, I usually have it around the 30th minute to compare. Getting it before is very common, but getting it later is not uncommon either. Just try not to get it delayed too much. If you get close to no gold and experience at all, you should stop attempting and failing too many ganks and instead try to farm a bit so you aren’t completely no fool.

Around this time you will often have your Orchid Malevolence. Your job in the late game is to look for heroes in combats to disable with Shackleshot. It would of course be best if you could disable the ones that need focus, but seeing that it’s not always possible, disabling anyone (or even double-disabling them) to nullify their combat powers for awhile is fine. You can and should use your Guinsoo’s Scythe of Vyse on the enemy that needs to be disabled (e.g. their carry hero or whatsoever, someone that is a great threat to your team).
When you fight, try to use your Orchid Malevolence first and then activate Focus Fire, because the amplified damage will neglect the reduced damage on Focus Fire greatly. Try to focus the hero that your team wants focus on. Mostly it will stand out in the combats whom you are focusing hence you should be able to determine it rather fast.

Again, try to avoid being focused when you fight. Don’t stand in the middle of everything, don’t be the first to run in and try to avoid as many bad ultimates and other abilities as possible. Try to stand from as far range as you can and do not get reckless. Survival is vital.

Your main job in the combats is basically trying to disable as many heroes as possible while using Orchid Malevolence/Focus Fire on a good target while staying safe from a distance.

A successfull shackle shot result on a full duration stun 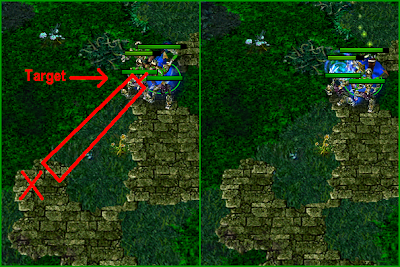 A failed shackle shot, only stun your target for a short time 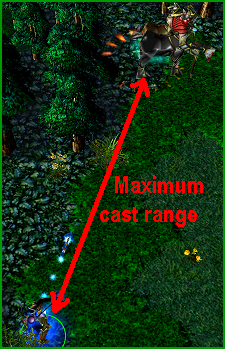 The maximum range of shackle shot 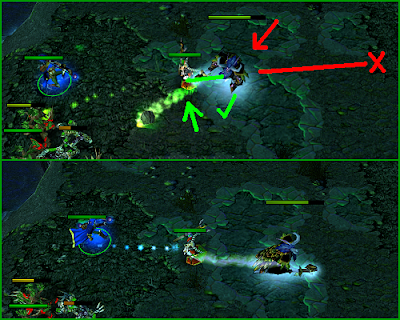 You can also stun your enemies by shackle shot the creeps 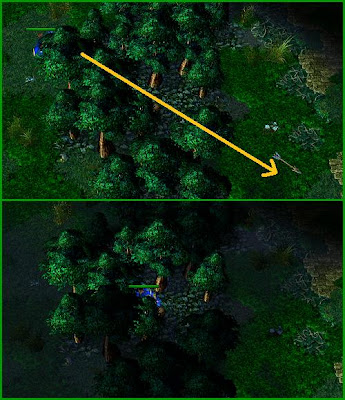 You can use Powershot to create a path in trees 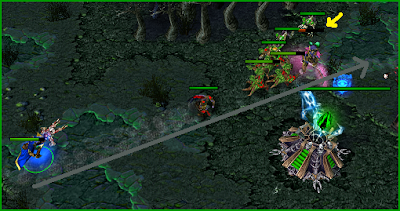 Powershot has a long distance, use it for your advantages

Do you have another Windrunner build/guide? Share it here. Feel free to give comment and notice me if i haven’t credit you ^-^ Oh yeah,