Tauren Chieftain Guide and Strategy. Cairne Bloodhoof the Tauren Chieftain is one of the most anticipated heroes on Dota 6.60 (the other one is Batrider). This post will be a place to share guide, walkthrough and item builds for Tauren Chieftain. This guide is still on proggress, so any feedback or suggestion from you is really helpfull 🙂

Since ancient times it has been prophesized by the Tauren elders that a Chieftain will come, strong as the mightiest warriors and wise as the eldest shamans. After many years of wandering the sacred lands, seeking wisdom from his forefathers, Cairne Bloodhoof has proven himself as the long awaited hero. Cairne carries with him the spirit of his mightiest ancestor, and now the ground shakes with the combined strength of the Chieftain and his guardian spirit. No physical nor magical barrier can reduce the power of his enchanted halberd, the weapon used by his guardian in ancient times. Such is the power of this axe that it can split the very earth itself. Seeking revenge for the ravaging of his homeland, Cairne will soon bring his wrath upon the Scourge.

Calls upon the spirit of his ancestors to join him in an earth-shattering echo, rendering nearby foes unconcious. The spirit and Tauren Chieftain both deal 80 damage in the area, the Spirit dealing magical damage and the physical form dealing physical damage. Unconscious enemies will wake if they get hit. If the spirit is seperated from you, it will still perform its part of the spell.

If you damage a knocked out unit, it no longer becomes knocked out/immobile.

There is a spirit version of you doing the stomp animation with you at the same time (you can see it as well). You deal physical damage and it deals magical damage.

Only player based damage can wake heroes. Damage dealt during a brief period after the stomp will not awaken heroes (0.65) 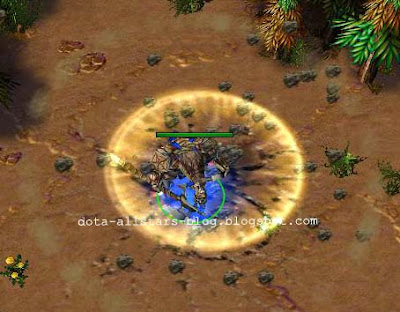 The knockout caused by this skill is very nice. 5 seconds is nice amount to prepare a combo attack. The only drawback that it needs 1.4 seconds to cast it. Use this together with Ancestral Spirit to land it better.

The Tauren Chieftain sends forth his guardian ancestor to bring ruin upon his foes. While seperate from the Chieftain, the spirit will mimic his movement and damage any unit it passes through. When it rejoins the Chieftain, it grants him bonus damage and movement speed for each enemy it has struck.

If the spirit has not rejoined with you before that period, it will charge towards you to move back into you and enchant you.

Enchanted Time: 9 (The duration you have the buffs after the joining of the ancestral spirit) 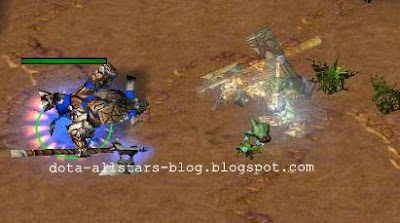 This skill is very helpfull to reach an enemy from far away. The distance you can cast your spirit is further than Blink Dagger, use this. You can also cast this on forest or hill. But you will need some practice in order to move the spirit well.

Passive.The Tauren Chieftain uses wisdom gathered throughout the ages to reduce everything to its most basic level. Removes base Magic and Physical resistance.

Note: This exists on the spirit as well.

Lots of people is missunderstanding this skill. It’s only remove the base magic and physical resistance. But some people interpreted 100% percentage nullification(level 4) as totally remove the resistance and make the damage pure. But yes, if your enemy doesn’t have Hood of Defiance, your magical damage will pure 😉 This skill counter Davion very much as his base armor is very high.

Using his mighty axe, the Tauren Chieften rends the very earth itself, sending a jagged crack under the feet of his enemies. After several seconds the earth implodes, sending his foes tumbling inwards. Any unit caught in the implosion will take damage based on their maximum life and have their speed slowed for a short time. Implodes after 3 seconds. Deals 35% of a unit’s maximum HP.

Example: You target a point, from where you are towards 1200 in the angle you click on, the split starts growing.
The split grows at 600 ms, so it takes 2 seconds to reach the end.
After it reaches the end, it plays an animation preparing for the implosion for 0.5 seconds and then it pulls everyone in and does the dmg/maim. 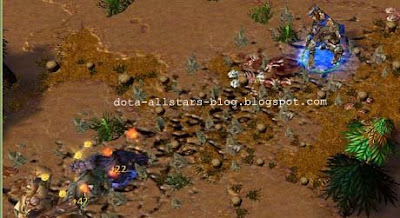 With a great setup, this skill can cause huge damage to the enemy. Not to mention the slow duration and it’s low cooldown. It’s very likely it will get nerfed. With Refresher Orb, you can get 70% enemies max HP in an instant!

Max Ancestral Spirit for harassing and farming. You’re a melee hero and Ancestral Spirit is help you harass and farm. Combine with Echo Stomp you can stun your enemies from distance. Earth Splitter taken as fast as possible because it’s really a great skill with long cast range, huge area and decent damage.

Skill Usage
Remember, when your cast Ancestral Spirit, your spirit has your Natural Order aura and can Echo Stomp as well. Open the combo with Ancestral Spirit, place it into the middle of enemies, cast Echo Stomp and continue with Earth Splitter. After the Spirit join you, chase them with movement speed buff and bonus damage.

Tauren Chieftain is a versatile hero. At first, i thought he was like Earth Shaker (Raigor) who merely a spell caster. But after some games with him, i realize that he’s more like Admiral/Kunkka. He has 3 active skills, but his DPS is high and his passive support this. With the bonus damage and movement speed from Ancestral Spirit, you can kill lot of heroes in the process. To maximize this potential, i suggest Battlefury and Power Treads as the core items. The Treads will give you attack speed and more movement speed to chase your opponent after your stun/slow. Battlefury is work nice as your spells is area and you will give huge damage at ease. Not to mention the mana regeneration.

Some Bracers for early last hitting and additional HP, if you farm well, you can skip this and buy Battlefury instead. Town Portal is a must to set a gank or helping team mates.

Sange Yasha is now cheaper and gives you more movespeed bonus. Tauren has high base movement speed (310), with Sange Yasha and Spirit bonus, almost every enemy get captured by him. Get a Refresher Orb to take 70% of enemies HP in an instant with double Earth Splitter. If you want to tank, go to Heart of Tarrasque instead. Shiva’s Guard for more AoE damage and cover your lack of armor. Or if you want some DPS, get Assault Cuirass instead.

Tauren Chieftain already have Ancestral Spirit to help land Stomp. Remember, you can place your spirit from far away! If you want to init, just cast your spirit from distance into the middle of enemies and immediately Stomp. His ulti also has long casting range. So personally i don’t think Dagger is good item for him.

Strategy
Start of with 2 Healing Salve and Circlets. Your main priority is to last hit/deny and aim for your Ring of Health immediately. If you have a stunner lane mate, try to aim some kill with Ancestral Spirit and Stomp combo. If you don’t, you still can harrass with your Spirit. Get your ulti as fast as possible.

After getting your RoH, you are hardly to harass and can stay a long time in the line. Aim your Void Stone to make Perseverance. After getting your boots and maybe some bracers, start ganking. With Spirit + Stomp combo and a decent team mate, you will likely net a kill. Start with Spirit and place it on the middle of your enemy. Immediately Stomp, only blinker enemy can evade this. While your enemies still sleep, use your ulti if you have it. Then go near him and finish it with your mate. Remember if a hero attack him, he will wake up. So think twice before attack the sleep enemies.

In the team fight, if you have a initiator(Ex: Magnus, Earthshaker, Tidehunter, Enigma), cast Earth Splitter as soon as your friend inits. If you don’t have it, place Ancestral Spirit into the middle of your enemies (the distance you can cast the spirit is further than Blink Dagger range!). Cast Echo Stomp and continue with Earth Splitter. After that, start roaming with your Battlefury and the bonus movement speed. It’s not strange to hear Triple Kill from Tauren in this version. So, before he got nerfed, enjoy your time 😉