Akasha is one of the many souls claimed by the blade, Frostmourne. Raised to serve the Lich King as a Banshee, she desired to become pure substance once more. Driving deep into the forests, she was able to subdue and possess a Succubus minion. Rightly bearing the title, Queen of Pain, she enjoys nothing more than inflicting massive damage on her foes, using both the poisonous strikes of her succubus host and the vicious howls retained from her Banshee nature. Akasha breaks her enemies’ eardrums with torturing screams, some so loud they manifest into powerful waves that ripple across the lands, shattering all in their wake.

Hurls a poisoned dagger which deals large initial damage, and then deals damage over time. The poisoned unit has its movement speed slowed for a short duration. Slow quantity increases per level.

The main purpose to take this skill is for the slow. Cast it to the enemy who will run away from the death.

Short distance teleportation that allows one to move in and out of combat.

A really useful spell. You can use this to entering the cliff and even dodge spells like Skeleton King’s Hellfire Blast. Be careful when use this skill for entering combat, she can die because can’t run away while her next Blink has not ready yet.

The Queen of Pain lets loose a piercing scream, damaging nearby enemies.

This skill is used to harass the enemies with high damage & little cooldown. Really useful for farming. Remember the Scream range by watching the picture below. 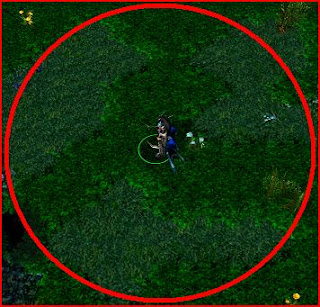 Creates a gigantic wave of sound which deals heavy damage to all units in a line.

This skill can be used for either opening or finishing a sequence of attack. It has huge AoE and can hit multiple heroes at once.

In the early minutes, she can harass her enemies using Scream of Pain for big instant damage and little cooldown. Maxed it as fast as you can. Level 1 Blink and Shadow Strike are enough in the early minutes to avoid from ganking or strike suddenly. Using Sonic Wave, she can finish her enemies using two nukes combined with the Scream. While ganking, leveling the Shadow Strike is necessary. As time goes by, her enemies become stronger and hard to kill instantly, so she needs to move as fast as possible to keep herself alive, that’s why leveling up Blink will help her. It’s your choice wether you want to maxed Blink or Shadow Strike first.

1. 3x Ironwood Branch + Mantle of Intelligence + 2 set of Tangos + 2 Clarity Potion or just empty Bottle
2. Void stone if you can harass your enemies and can keep your hp full. Point booster / Ring of Health if you are harassed.
3. Point booster if you didn’t have it + Boots of Speed + Finish Perseverance.
4. Finish Power Treads (+ Town Portals) or Boots of Travel

Perseverance is equipped for regenerating hp & mana. Point Booster is equipped to increase hp and mana little much more so she is little harder to die and can cast spells without lack of mana. Using Boots of Travel, she can help her friends killing enemies anywhere when needed. Empty Bottle (optional) is standard item in tourney game. It is used to restore hp and mana in few seconds and get the rune.

Getting Linkens Sphere is your main target. With Linken and Blink, you will be really hard to kill. Aghanim is necessary to increase Sonic Wave’s ability (increase damage and lower cooldown). If your team lack of disable, you can choose to get Guinsoo first. Eye of Skadi will be your luxury if the game dragged long enough. Shiva’s guard increase her armor so she is harder to be killed and also to cast Arctic Blast for slowing enemies around her and clearing the way faster.

You should pick this hero when your team need a good pusher, ganker and carry at the same time since she can clear the enemy creeps really fast, has Blink ability to enter or leaving the combat and can farm really quick. Try not to pick her when there are Doombringer, Enigma, Silencer, Traxex and/or Rooftrellen as your enemy.

She is needed in the mid game game to help your team harass/kill the enemy/enemies and clearing the way to reach tower. She need to level up as soon as possible. So, place her first in the solo lane.

In early minutes, harassing your enemy (if melee) using common attack is a good choice. Don’t waste your mana, cast Scream of Pain to get lots of creeps kill and hurting your enemies at the same time. When she have reached level 6 or 7 and you’re seeing enemy’s hp is low enough to be killed, Blink near him, cast Scream of Pain, Shadow Strike and Sonic Wave. One thing that you must keep on your mind is beware of your mana capacity. When you Blinking in and you’re miscalculated your mana, you maybe got in trouble.

In the mid game, you should start helping your team to gank the enemies. Cast Blink to initiate the gank, use Shadow Strike to slow your target and immediately cast Scream of Pain while attacking together with your team. You can use Sonic Wave for either opening or finishing attack. If your enemy try to run away with his low hp, follow him while attacking and waiting for the Scream of Pain & Blink cooldown which is very low. Most of the time you will get him killed for sure.

However, don’t be too reckless. When you’re Blinking in, that’s mean you must wait another 6 seconds until you can Blinking out. A lot of Akasha players die because they taunted by the enemies and ended up dying because of the Blink cooldown. Observe the enemies heroes. If you don’t see them anywhere in the map and someone with low hp just standing there in the wild, it could be a bait to kill you.

In the team clash, you should utilize Blink to make your enemies confused since it has little cooldown to make Akasha can either entering or leaving combat quickly. Depend on your team, you can use Sonic Wave as the opening attack (most of the time) or finishing attack. If there’s Raigor on your team, let him open the attack because your Wave can clear the enemy creeps which is necessary for him. If you got Yurnero/Luna, use your wave to clear the creeps to let them deal massive damage to the enemy heroes with Omnislash/Eclipse.

After let your team initiator start the battle and once the enemies thrown all the ultimates, enter the clash and try to target their main carry. Cast Scream of Pain and Shadow Strike, cast Hex to the enemies carry and Arctic Blast if you have them. If they start focusing on you, use Blink to leave the combat while analyze the situation. Always, always, always try to think about your safety still though. Taking risks often results in your own death. You can entering combat again few seconds later, casting Scream of Pain and chase the low hp enemies. If the enemies is running away, you can chaseeasily using the Blink and finish them.