Kunkka Guide & Build, a hero that introduced on Dota 6.55. I love this hero, so much cooler than Goblin Clockwerk ^-^ With Alleria the Windrunner, they are both Sentinels new ammunition. This hero is Strength type and has some good skills to support his physical attack. 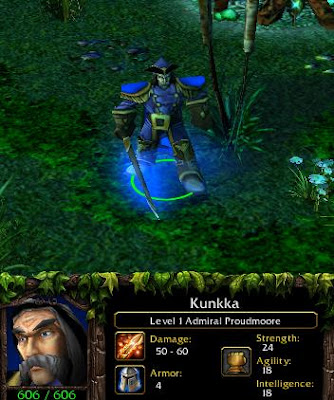 The coolest skill is his ultimate, using a ghostship to hit the enemies and gives buff to the allies. His first skills is make a water blown from the ground and damage the enemies. His second skill gives you bonus damage and splash every few hits. His third skill is mark the spot,marks a hero and leaves an X in its area, after 5 seconds the targetted hero moves back to the X mark.

Here is more explanation about his skills:

Torrent
Using his unparalleled knowledge of the sea, Kunkka is able to summon a blast of water at a targeted area. After 2 seconds a fierce torrent of water errupts from the ground, the stream blasting enemies caught in the AoE into the sky, dealing damage and slowing movement speed by 30%.
Cooldown: 12
Manacost: 105
This skill pretty cool, gives 120/180/240/300 damage and the torrent last for 2/3/4/5 seconds.

TideBringer
Kunkka’s legendary sword Tidebringer is infused with the very power of the sea. Akin to the ebb and flow, Tidebringer passively grants the hero increased damage and 500 AoE cleave for a single strike every once a while.
This skill is just like Leviathan’s Anchor Smash and Weaver double damage combined. Gives 15/30/45/60 bonus damage every 16/12/8/4 seconds. Great for last hitting.

X Marks the Spot
In order to make an assembly for his troops, Admiral Proudmoore targets a hero and marks its current position on the ground. After a few seconds, the hero will instantly return to the mark.
Cooldown: 60/50/40/30
Manacost: 110
Marks a hero and leaves an X in its area, after a 2/3/4/5 seconds the targetted hero moves back to the X mark with 500/650/800/950 cast range. Use this to make the blinker enemy cannot escape.

Ghost Ship (ultimate)
The admiral summons the mythical ghost ship S.S. CoCo to the battlefield. Allies are doused in Captain CoCo’s Rum, inebriating them for 30% bonus movespeed and numbness to incoming damage, causing them to feel only half of the pain now and half after the Rum wears off. Enemies, pirates and scurvy knaves are dashed on the rocks for damage and a brief stun when the ship crashes.
Cooldown: 100/80/60
Manacost: 150
Great skills to initiate battle and even for chasing enemies. It gives 300/400/500 crash damages and the CoCo’s Rum last 5/6/7 seconds. 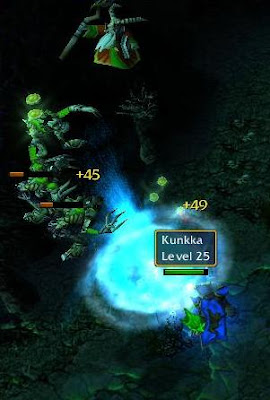 Torrent, pick a place, wait for 2 seconds and KABOOOM! A blast of water coming out from the ground and throw everything to the air :p 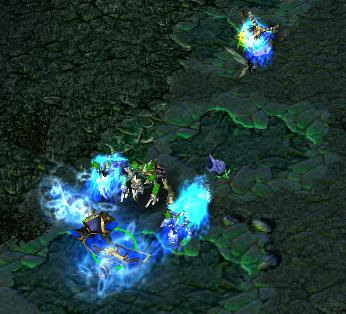 Tidebringer, great splash damage. Look at the range, even the ranged creeps get hit too! Neat skill for farming. 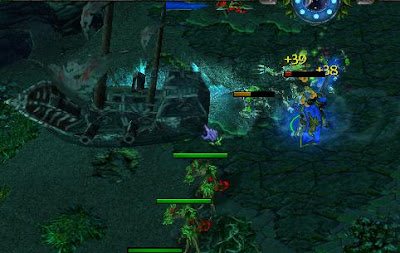 Ghost Ship, this ship will help you initiate battle. You feel like fighting on Pirates of Caribbean with this skill. 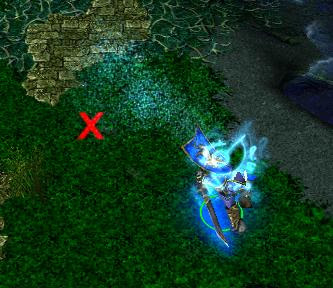 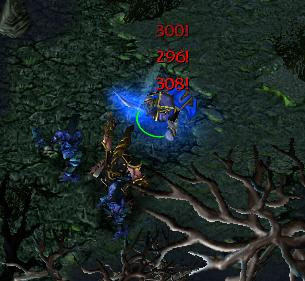 Captain Coco’s Rum, drink the rum, raise movement speed and your pain is gone a half. But the other half will turn back after the rums effect gone though ^_^

Tidebringer is maxed first period. I cannot see any reason why it should not be taken immediatly as it becomes available. It gives you a way to “nuke” quite effectively and constantly all-the-while helping you last hit and score gold.

Torrent is the next best thing besides picking your ultimate “Ghost Ship” at level 6. At the start of the game, use it when enemies go to last hit or deny–this is the best strategy. However, you will also use it to save yourself from damage, or worse: death. (ex: Pudge, Omni, VS, Veno.) Use it when your allies come to gank your lane.

Ghost Ship is excellent with the MS bonus, Nuke/Stun, and CoCo… just a great spell period.

XMtS becomes more relevant later on when you start to play in bigger groups and you are no longer attached to a particular lane. I wouldn’t hold off on getting it though… stats are not worth it considering the increased range and duration XMtS gets with each level… yes with added mana cost but you do get mana regen item and bracers.

Your hero can babysit or take up solo mid. Try to last hit with Tidebringer all the while hitting enemy with its AoE.

If you soloed mid, early Bottle is a must (to control runes). Start ganking around level 8. Prior to that, you should only leave your position to aid in a river/jungle kill. Early Boots of Speed is advisable.

Remember, at level 6, you now have a decent amount of potential to land a kill using Ghost Ship. If someone comes to gank make sure it is available. When ganking, having it available is very advisable.

Early game for Proudmoore is a lot of farming… I would say you are in good shape for mid game once you upgraded your boots and have a good mana source.

Ganking with intermittent farming. Farm jungle spots on the fly. Do not ignore the players’ (allied and enemy) activities. You really should have good comm (vent if you are serious) or–at the very least–have some allies working with you.

Do not waste XMTS, use it with:
– Torrent
– Chasing
– Ghost Ship

Use XMTS it on:
– Channelers (right before the *time window* for them to use their combo arises)
– Disablers (that you wish to Torrent)

When ganking, try to use torrent w/o XMTS… this takes a lot of practice and it is best used when the enemy doesn’t know you’re there. XMTS and Torrent synergize extremely well but that does not mean to always use them together. I personally only use them together when I’m out in plain sight of the enemy (for instance a 1v1 situation or team battle) and want to guarantee the disable. Also, in big, complicated fights it is good to target the enemy with the disables and strong ultimates (before they get into position… so they get put back OUT of position) with this XMTS/torrent combo… it will put him back away from the fight and buy your team some time.

Initiating with Ghost Ship is the best (or most effective) use for this spell. If your team is fleeing (ie was ganked) and the enemy is already on top of you, then cast Ghost Ship in the direction you are all moving. If the enemy is chasing your team but are somewhat behind you, cast it in the opposite direction so that you get the 10% MS boost sooner.

If you are going to use Ghost Ship during a fight (after initiation), use it ASAP and target the disablers.

When you spells are on CD, position yourself to damage the most # of enemies with Tidebringer. Harass the disablers (or the hero your team is focusing) and try to get them to cast their spells on you. (Usually you want to walk behind the enemy disabler so that you are hitting the other enemies.)

Same as mid game, however Ghost Ship becomes more important… so I will say just one thing:

CAST GHOST SHIP AS SOON AS THE TEAM BATTLE BEGINS FOR KUNKKA. LEARN THE TIMING. FEEL IT. KNOW IT.

Important Points:
Torrent cancels Sand King’s Sand Storm.
“X” does NOT cancel windwalk-type abilities.
“X” cancels Panda’s Primal Split if cast before Primal Split.
Avatar, Jugg’s Blade Fury, Rage, and Infest ALL cancel “X”.
Use “X” on enemy. Have Rhasta cast Mass Wards on top of “X”. Hit Return.
Use “X” before enemy Lothar’s, Leaps, Runs from your tower.
Use “X” after enemy starts to cast Town Portal, Teleportation, Dark Rift.
Use “X” on enemy. Have ES cast fissure in such a way that you “trap” the “X” on the side closer to your base. Immediately hit Return. Kill. Works best in top or bot lanes.
“X” cancels enemy’s channeling spells.
Cast “X” on enemy. Get POTM to fire arrow at “X”. When arrow is about to reach “X”, hit Return. While enemy is stunned, cast Torrent or Ghost Ship.
Cast “X” on friendly VS before Swap -or- cast “X” on swapped enemy after Swap.
“X” can be used to set up friendly Black Hole, Reverse Polarity, Epicenter, Pure Lesh (TS) Pwnage, etc…
Use “X” to prevent stray enemies from fleeing… free kill. Think about aftermath of big battles.
Use “X” on high MS / stunning chasers when fleeing.
Use “X” on enemies that require a high degree of positioning (ex: Lesh, Ursa, and Axe).
When you Cyclone an enemy, IMMEDIATELY place a torrent under him.
Feel free to give comment and notice me if i haven’t credit you ^__^